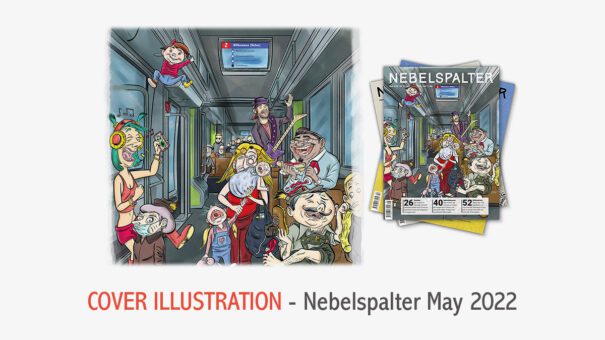 Commissioned cover illustration in a fun, colourful, cartoon style on the topic of „public transportation“

Appeared in Nebelspalter Magazine, May 2022

The Nebelspalter is a Swiss satirical magazine. It was founded in 1875 by Jean Nötzli of Zurich as an “illustrated humorous political weekly.” The magazine was modelled on British magazine Punch. When Punch ceased publication in 2002, Nebelspalter became the oldest continually published humour magazine in the world.

In 1983, the Nebelspalter was the first magazine to publish my cartoons, when I was age 16. I subsequently became the youngest ever Nebelspalter cartoonist. In recent years I had ceased to submit and collaborate with the magazine, but I was contacted by them in early 2022 and asked if I was interested in contributing once again. As I am an independent cartoonist and artist and there are fewer and fewer print magazines which still publish cartoons, I did not hesitate. Since then, I have contributed at a relatively regular pace.

Ironically, this cover appeared almost exactly 30 years after my last cover Illustration for the Nebelspalter, which appeared on the 1st of June 1992. 😃